As the chart below shows, since inception the interest rate profile of Lending Club loans has been broadening, from 7.12% to 15.96% in 2007 to 5.42% to 24.59% in 2011. They offer lenders loans with a broad range of interest rates to chose from. The dense colored area within a bar indicates high volume of loans were issued. Whereas the white space within a bar indicates no loans were issued. 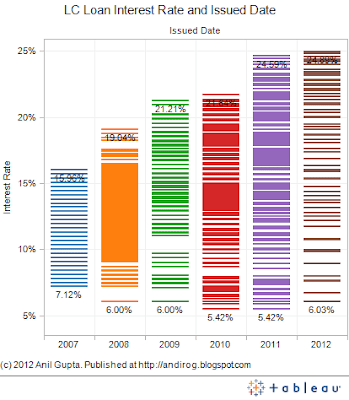 From the above chart, two observations stand out right away:

Peter Renton pointed out in his comment on my previous post Lending Club Loan Issue Date and Default Rate that  loans from 2007 and 2008 may not be representative that of loans issued in 2009 and after due to worst financial crisis in 2007 and 2008 and major changes made by Lending Club in its loan underwriting model.

The significantly small volume of loans issued in 2007 and 2008 also creates larger uncertainty in expected defaults and returns due to small sample size. Though the loan volume is still not sufficiently large in 2009, it is the best we have available to analyze defaults and returns for a 3 year term loan. 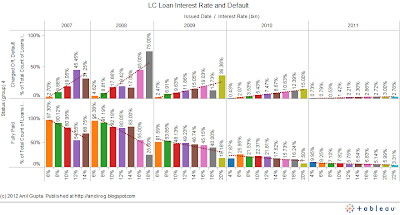 The above chart shows the percentage of loans charged off and default as well as fully paid. As the chart indicates, the aging of loans has major impact on both rates - charged off and fully paid. As expected, the default rate rises with rising interest rates (almost linearly with the interest rate bins for years 2009 through 2011). Though default rate at various interest levels in 2009 are significantly better than 2007 and 2008, readers need to keep in mind that only 3 year term loans issued in first four months of 2009 have matured and only about 45% of loans issued in 2009 are fully paid by May 1, 2012.

In my opinion, the default rate for 2009 issued loans are understated and most likely will rise to be somewhere in between the current numbers and ones for 2008 and 2009. It is just a hunch based on the slope of the trend lines for different years and expectation of slope for 2009 trend line to be similar to 2007 and 2008.

At this point, I have information about expected default rates for different ages of loans and  for different interest rate bins. It shouldn't be that difficult to calculate the expected return on three year term loans.

I made the following assumptions to calculate the expected return:

The chart below shows the value of portfolio at the end of 3 year for an initial investment of $2,500 in 100 $25 notes at different interest rate bins and for various default month. 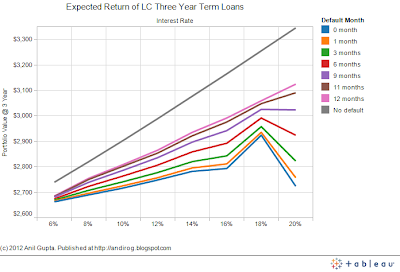