The chart below shows the loan volume for grade B loans in relation to loan amount buckets and listing date since 2009. I decided to exclude 2007 and 2008 as volume for these years was very small. Among all credit grades, loans with credit grade B have the largest volume. 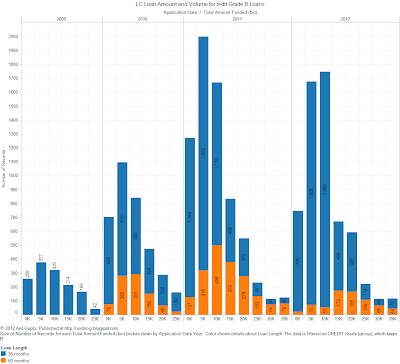 The chart below shows the loan status for grade B 36 month loans in relation to loan amount buckets since 2008. Similar to the credit grade A loans, the 15.3% default rate of credit grade B loans doesn't appear too bad compared to performance of stock market in 2008. 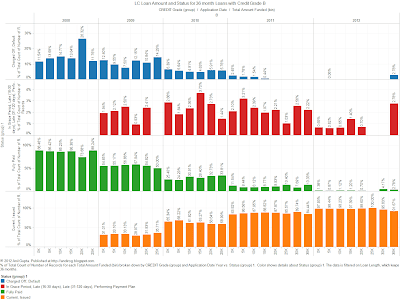 Considering that 36 month loans issued in first six months of 2009 have matured, we can expect to have 12 to 14% of credit grade B loans defaulting till maturity. The default rate for credit grade B loans is almost twice that for credit grade A loans as discussed in previous post Lending Club Loan Amount: Defaults for Credit Grade A loans. Loans in the lowest loan amount bucket (up to $4,999) and in the highest loan amount bucket ($25,000) appear to have the worst default rate in both 2009 and 2010. 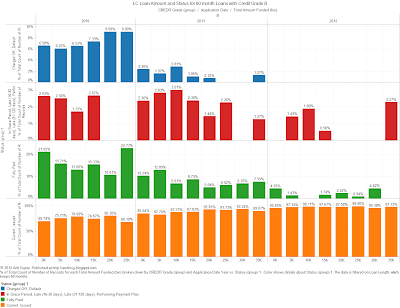 The updates on this blog have become less frequent. I am experiencing summer slowdown in my analysis of Lending Club historical loan data. As Mrs. RT is becoming more involved with loan selection, she asked me to automate some aspects of loan selection to reduce the time she needs to spend on filtering loans. I am currently working on implementing the features she requested in our loan selection process, which is taking time away from loan analysis and blog.

The chart below shows the loan status for grade A 36 month loans in relation to loan amount buckets since 2007. 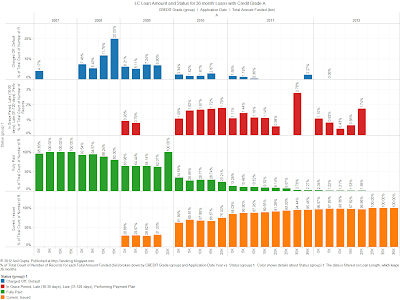 We can safely ignore the results for 2007 as less than 100 loans were listed with grade A. Comparing with the financial meltdown of 2008 when most stock markets fell almost 50%, the results for grade A loans issued in 2008 don't look that bad. The worst result of one out of five loans defaulting was for lenders who invested in 36 month grade A loans with loan amount between $15,000 and $19,999. This result can be considered anomaly as only five loans were issued in this loan amount bucket and one of them was charged off. Assuming that loan issued in 2009 took into consideration the 2008 financial meltdown, the results for grade A loan issued in 2008 are not that much different from 2009.

One interesting pattern is that loans with amount below $4,999 have consistently higher charged off and defaults.  For example, there are 1.58% (20 loans) issued in 2011 with loan amount less than $5,000 that are already charged off compared to only 1.18% (27 loans) for next loan amount bucket of $5,000 - $9,999. This trend is puzzling as I didn't observe any patterns in other parameters that provide clue to why highest quality loans with lowest loan amounts have higher default rate.

The chart below shows the loan status for grade A 60 month loans in relation to loan amount buckets. The 60 month loans started to be issued since 2010. 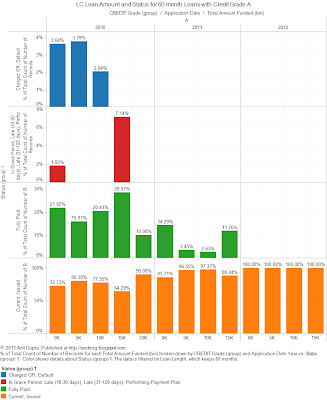 One observation that right away jumps out is the lack of 60 month loans issued since 2011 with charged off, default and late status. It appears that in first 6 to 18 months, the borrowers of such loans are very diligent in regularly making payments and paying off loans. After 18 months, the percentage of loans with charge off, default, and late status rise significantly and one much higher than comparable 36 month loans.

Other logos just look like variation of L and A from Lend Academy word and don't communicate anything more than just Lend Academy. May be after rebranding, he can let me have his current logo or this one if he decides not to use it for his venture. :-)

Posted by Anil Gupta at 7:30 AM No comments:

The chart below shows the Average Loan Amount and Total Amount Funded as a function of Credit Grade and Year of Loan Listing for 36 month Loans. 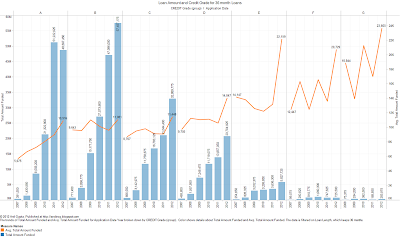 The similar chart for 60 month loans is shown below for the average loan amount and total amount funded w.r.t. Credit Grade. 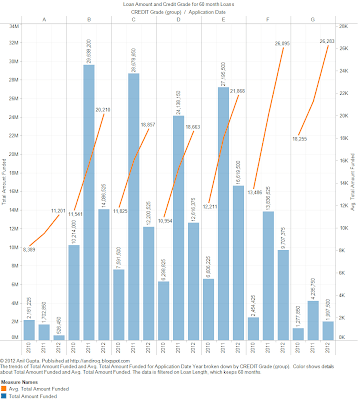 The two factors most likely contributed to higher percentage growth of average loan amount, number of loans and total amount funded for lower quality (Grade E through G) loans. First, the lower loan volume in 2010 for Grade E through G loans, of which the percentage is calculated. Second, the more demand from lenders for higher interest bearing, i.e. lower quality loans. 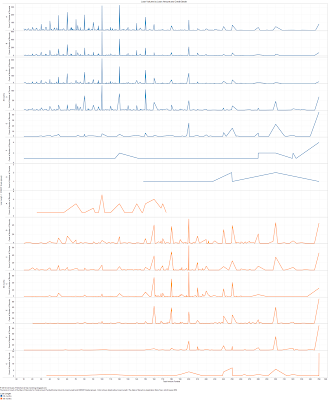 Most loan amounts appear to be in the increments of $500 or $1,000. It will be interesting to see if there is a relationship between such loan amounts and default rate.

With Personal Loans, Borrowers Hear Gift and Lenders Get Resentful - A good reason why whenever someone asks me to lend them money, I tell them to apply on Lending Club for loan. I ask them to let me know the loan number and I will try to fund some amount. 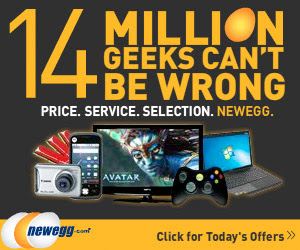