The minimum credit criteria in the latest prospectus filed in November 2012 is listed as follows:


Under the current credit policy, prospective borrower members must have among other elements:


The minimum credit criteria in the previous prospectus filed in August 2012 is listed as follows:


Under the current credit policy, prospective borrower members must have among other elements:

There was some discussion on LendAcademy forum about Increase in Applicants With Public Records. The table below shows the monthly loan volume with respect to number of public records for loans issued in 2012. In November, 127 loans were issued to borrowers who had at least one public record. The number of such loans increased to 202 in December, an increase of almost 60% over previous month.

I believe the changes in the minimum credit criteria as mentioned in November prospectus may have resulted in increase of borrowers with public records in December. No longer Lending Club excludes borrowers with current delinquencies, recent bankruptcies, tax liens, and non-medical related collections in past 12 months.

Did Lending Club proprietary credit grade model account for borrowers who have any amount delinquent currently? Not a chance! Any reasonable proprietary model most likely will consider borrower with higher delinquent amount to be of higher credit risk.

The loan details page on PeerCube can be of great help to lenders as it shows 71 different loan and borrower attributes including the above-mentioned attributes that may shed better light on borrower's credit quality.

Below is a screen capture of PeerCube's loan detail page for a C2 credit grade loan with such attributes highlighted. Will you invest in a C2 grade loan whose borrower has one bankruptcy, two tax liens, two delinquent accountss and $5,369 amount currently delinquent?

Reviewing the loan detail page, PeerCube users can avoid loans that may be of higher risk than the assigned credit grade represents.

In last few weeks, I have become a big fan of blog Long-Term Returns. I highly recommend the blog to all readers interested in personal finance and investment. Most personal finance bloggers tend to express opinions based on personal experiences and without supporting data. That is where this blogger sets himself apart with the analytical perspective. Though the blogger is not a fan of peer to peer lending, p2p lenders will also benefit from his coverage of related topics of bonds, treasuries and fixed income securities.

Posted by Anil Gupta at 7:30 AM No comments: Links to this post

Recently, in response to my post Lending Club 2012 in Review, Part I: Loan Volume and Amount Funded, a commentator pointed out a few recent changes related to Credit Grade in Lending Club's November 2012 prospectus and scarcity of F credit grade loans. Also, on LendAcademy forums, there were a few related discussions: High demand for D-G grades, Increase in Applicants With Public Record?, and Has LC loan quality dropped?. So, I decided to review the prospectus to see if I can find these changes.

Below is a highlight from the November 2012 prospectus available at Lending Club website:


Q: What are LendingClub loan grades?


In addition to replacing previously listed loan and borrower attributes with the proprietary scoring model, the current prospectus also mentions allowing borrowers with delinquencies and public records. Both terms are highlighted above in bold.

Such changes are not surprising as Lending Club is gearing up for IPO. It's focus has been shifting to non-lending financial institutions as lenders and attracting more borrowers to its platform becoming higher priority.

Can we confirm these changes using historical data from 2012?

The chart below shows the monthly loan volume in 2012 in relation to Credit Grade. The monthly volume lines for most months follow the same pattern except for December (Green line). There is a shift in the line for December from regular pattern for other months indicating there may have been a change in December how loans were allocated to different Credit Grade buckets.

For most businesses, December tend to be a unique month due to holidays and end of calendar year. The chart below shows the monthly loan volume for 2011. The hypothesis being that if December is somehow unique month for share of loan volume across Credit Grade, it should show up in previous years too. As the chart shows, there is no deviation in line for December compared to the pattern for other months in 2011. This confirms that something changed in how credit grades are assigned for loans issued in December 2012.

Another interesting observation is the large spreads in loan volume for loans with A through C credit grades in December. As shown in the chart for November, most volume changes for such loans will be typically low due to the high volume of loans. An usually large spread in volume will indicate influence of a policy change where shifting of loans taking place across credit grades from credit grade with decline in volume to credit grades with rise in volume.

PeerCube: Benefits of Loan Details on One Page

In my last blog post Lending Club 2012 in Review. Part III: Loan Title, Loan Description and State of Residence, I mentioned that I may take a short break to discuss a few development at PeerCube. In response, I received a suggestion to maintain the continuity of historical data analysis and discuss any PeerCube updates in a small separate section of the blog post. I thought the idea was excellent and time to time I plan to include PeerCube updates at the end of regular blog posts.

The loan details page on PeerCube includes 71 different loan and borrower attributes on one page. This collection of information enables users to  quickly scan loan details to identify any unusual attributes. With the recent changes in Lending Club policies, it is becoming much more important to review the loan details.

Depending on your risk profile, you may decide to skip lending to this borrower due to financial uncertainty of the borrower. For example, this borrower may be a divorcee on hook for mortgage payments on a house occupied by ex-spouse, alimony, child support, etc. Such uncertainty about borrower's financial situation raises the risk profile of this loan significantly. Unless a lender was reviewing multiple spreadsheets made available by Lending Club or easy-to-scan one pager for the loan on PeerCube, he or she will misjudge the default risk with this loan.

Posted by Anil Gupta at 7:30 AM 9 comments: Links to this post

Continuing the year-end review of Lending Club loans issued in 2012 from Part I and Part II where I discussed Loan Volume, Amount Funded, Interest Rate, Credit Grade and Loan Purpose ... 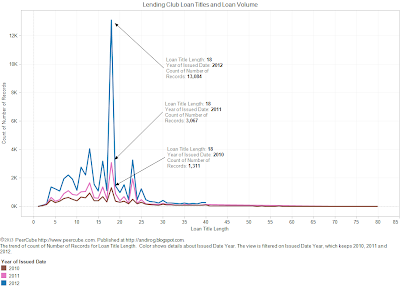 The most popular 18 characters loan titles in 2012 are listed below. Considering 77% of all loans in 2012 were issued for debt consolidation and credit card refinancing purposes, it is not surprising to see related phrases dominating the loan titles. 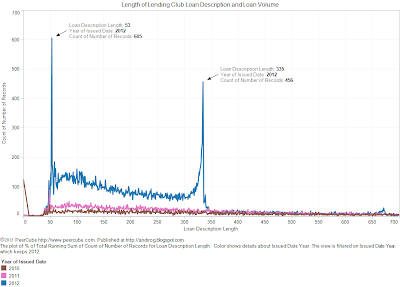 In future blog posts, I may take a short break from reviewing characteristics of Lending Club loans in 2012 to discuss a few developments at PeerCube.

Posted by Anil Gupta at 7:30 AM No comments: Links to this post

Continuing the year-end review of Lending Club loans from my previous post where I discussed Loan Volume and Amount Funded ...

At this growth rate, soon loan purpose attribute will become irrelevant as a selection criteria for loans. There is nothing stopping borrowers from claiming debt consolidation and credit card refinancing by running expenses for other loan purposes through credit card.

The table below shows the percentage of reported loan purposes within a specific credit grade. An interesting observation is that the debt consolidation loan purpose was more often reported for lower quality loans with grades E, F and G while the credit card refinancing loan purpose was more often reported for higher quality loans with grades A through D. Another interesting data is that the majority of loans for major purchases and car carry the high quality grade A rating while the majority of loans for home purchase carry the lowest quality grade G.

In my next post, I will continue reviewing the characteristics of Lending Club loans issued in 2012.

Send Large Files Up to 2GB - Free 14 Day Trial!
Posted by Anil Gupta at 7:30 AM No comments: Links to this post

Happy New Year to all my readers and to lenders on Lending Club platform. As Peter mentioned in his post In 2012 U.S. P2P Lenders Issue $871 Million in New Loans, Lending Club had terrific 2012.

As Lending Club announced in its blog post Investor Updates and Enhancements, beginning October 2012, LC started to reserve some loans for institutional and other investors who wanted to fully fund loans themselves. Since then percentage of loans offered initially as Whole on monthly basis is continuing to increase. In October 2012, only 13.51% of loans were initially offered as Whole and that ratio more than doubled to 29.10% by December. Overall in Quarter 4, 20.85% of loans were initially offered as Whole.

Lending Club lenders funded $718 million in loans issued in 2012. This amount is over two-and-a-half times more than $257 million funded in 2011. As mentioned earlier, while the number of loans issued in last four months of 2012 stagnated, the amount funded continued to rise in the same period.

Going forward, I am particularly interested in monitoring Initial Listing Status and how it impacts retail lenders like myself. I was surprised to see that the percentage of total amount funded for Whole loans is almost same as the percentage of loans initially listed as Whole loans. With such a short duration since initial listing status went into effect, it is difficult to make any significant observations.

Lending Club had spectacular year 2012 as observed by total amount funded. There is significant increase in larger loans issued last year. I expect the growth in 2013 to be driven by loans of larger amounts rather than increase in number of loans listed on LC platform. 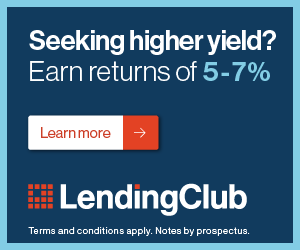 Posted by Anil Gupta at 7:30 AM 2 comments: Links to this post