Some P2P lending investment strategies may rely on the percentage of loan amount already funded or number of lenders already committed or average funding per lender in a loan. I agree with the basic premise of coat-tailing on commitment of someone else or institutional money as a qualifying criteria. However, I suspect that such strategies predominantly will select loans that are late in their funding cycle and listings near expiration. This will be especially true for investors who review and select loans infrequently. Such investors, including myself, may miss out attractive loans that get funded very quickly.

Is there a right time to review loans in their funding cycle on Lending Club? I started out today's analysis with this question. As I mentioned in my previous post Lending Club Loan Application Date - When to Invest?, I switched my note selection day from Tuesday to Wednesday night as majority of new loans seem to be listed early in the week. But this schedule change means catching loan listings near expiration. Are the loans funded and issued quickly more desirable from defaults perspective?

Though Lending Club provides information on amount and number of lenders already committed to a loan during notes selection for new loans, it doesn't provide such details in historical loans data file. Thus a direct analysis using such parameters is not feasible. The days between the loan listing date and loan issued date may serve as a close proxy for lender interest in loans.

The chart below shows the loan volume with number of days between when loan was listed and when loan was issued. Originally, I was surprised to see a few loans issued up to five days before they were listed on the platform. After reading comment "I invested a significant amount of my own money to fund the first loans on the platform" by Lending Club CEO in Finovate interview, such loans no longer seem surprising as most start-ups in their early days need to be creative to generate demand and show traction. Still, this is an interesting observation that needed to be highlighted as such loans were issued in early 2009. 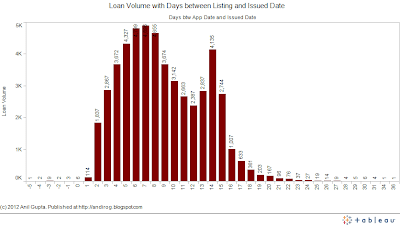 The issuance of loans can take as long as 36 days after being listed on the platform though most get issued within 21 days. The period between listing and issuance has been lengthening year over year, from 21 days in 2007 to 36 days in 2012. I'm guessing its because of Lending Club staff is not able to keep up with the tremendous growth in loan volume.

Some loans are issued within couple of days after being listed. These loans might be funded by or reserved for institutional investors, LC Advisors, and PRIME account holders. Someone needs to have inside access at Lending Club for such a quick turnaround. Such borrowers might also be fully-vetted before loans being listed on the platform.

Two separate peaks are visible in the chart, one at 7 days and another one at 14 days. Most loans took either 3 to 11 days or 13 to 15 days between listing and issue. The former group most likely contains desirable loans. The later group appears to be right about the time when loan listing expires. The later group may be result of everybody rushing into fund at the last moment. Also, by the time loan listing expires, most borrowers are fully-vetted so turnaround time for issuing loan may be shorter. I suspect the former group of loans to have lower defaults than the later group.

The chart below shows the percentage of loans with Charged Off and Default status with the number of days between loan listing and loan issued date. One observation right away stands out - the loans issued within a day of listing have higher than average default - so much for "insider" advantage! 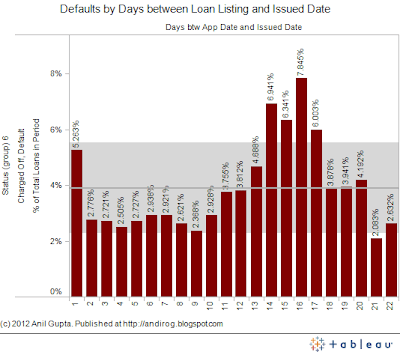 As the number of days increase between loan listing and loan issue, the default rate increases, peaking just after expiration of loan listing. It appears a lot fewer loans issued within 10 days of listing have charged off and default status compared to the ones issued at near or after listing expiration.

The chart below showing default rates for interest rate bins separately confirms the above observation. The percentage of loans with charged-off and default status is higher near and after loan listings expiration for most interest rate bins. See my previous post Lending Club Loan Interest Rate and Return - Do Defaults Matter? for explanation of interest rate bin.

Recently Caron Beesley wrote a very good article P2P Lending and Crowdfunding - Explore the New Frontier for Small Business Lending with good suggestions for borrowers planning to start a small business. I frequently notice on Lending Club that business borrowers don't provide sufficient information about business. Borrowers will have much better chance of getting funded if you tell lenders your story and share your achievements and progress to date.