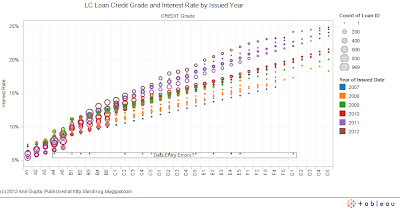 The chart below shows the Interest Rates as a function of Credit Grade for the month of February 2012. Unlike the previous chart which shows loan issued year, this chart shows the loan listing month. As the chart shows, there were two sets of interest rates for most loan credit grades. This indicates that February was the month when Lending Club adjusted the interest rates on loans. 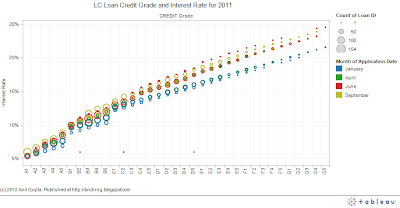 The chart below shows the Average Interest Rates as a function of Credit Grades plotted for each year. 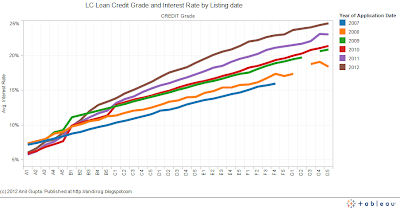 
Recently, Richard published an interesting post Using the Social in Social Lending about how he selects loans using the descriptions and answers provided by the borrowers. He is definitely on to something that can be used as qualifying criteria. Check it out.

The language and persuasion in online peer-to-peer lending market has been of great interest to academic researchers also. I came across a particularly interesting research paper Peer to Peer Lending: The Relationship Between Language Features, Trustworthiness, and Persuasion Success published in Journal of Applied Communication Research. Unfortunately, the full text is behind a paywall but you may be able to request a copy from author Laura Larrimore. The abstract mentions: